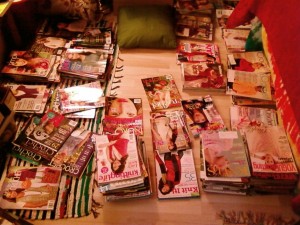 Sorting them into neat little stacks

There comes a time in every knitter’s life when it’s time for the dreaded magazine purge!! I subscribe to a number of both knit and crochet magazines, and I buy quite a few more off the rack. Impulsively. Without checking to see if I already have them. As a result, I regularly find magazines that I have bought twice!! Just think of all the yarn I could have bought, if only I hadn’t bought all those duplicate magazines!! 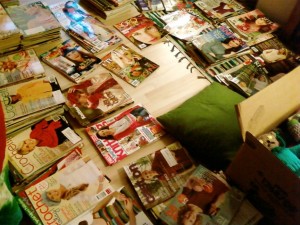 Wow! That's a LOT of magazines!

But, I guess my carelessness can be someone else’s gain. I’ll see if any of my ‘yarn friends’ would like to put them to good use. So, check your magazine stash and see if you’re missing any issues.


Below is a list of the issues that need homes:

And photos of the covers, so you won’t make the same mistake I did!!

If you see one you want, just let me know. You can send me a message on Facebook:
My Facebook page Send me a friend request if we’re not friends already.

If you can afford a couple of bucks for postage, that would be appreciated. If not, don’t let that stop you from claiming one for yourself. Someone might as well get some use out of them!